„The Amazing Company of a Centipede“, directed by Milos Jagodic 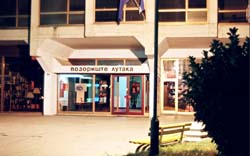 Since its founding, the Puppet Theatre Niš participated in